Plug your 3.5mm 3-Conductor Stereo Male Plug into an Adapter that will Allow Connection to a 3.5mm 2-Conductor Mono Jack • Part No: M2SA

Please Note that our Model M2SGA is the Gold-Plated equivalent adapter and will substitute for the Model M2SA.

This adapter enables users to plug their 3-conductor Stereo Plug Earphones or Headphones into a 2-Conductor MONO Audio Jack.

If you have stereo earphones or stereo headphones and you want to plug those into your trusty old table radio, tape recorder, walkie talkie or dictiphone transcription recorder. This may be the adapter for you. You can tell that you have a stereo headphone or stereo earphone by examining the plug. Stereo plugs will have three metal contacts that are separated by two black bands. 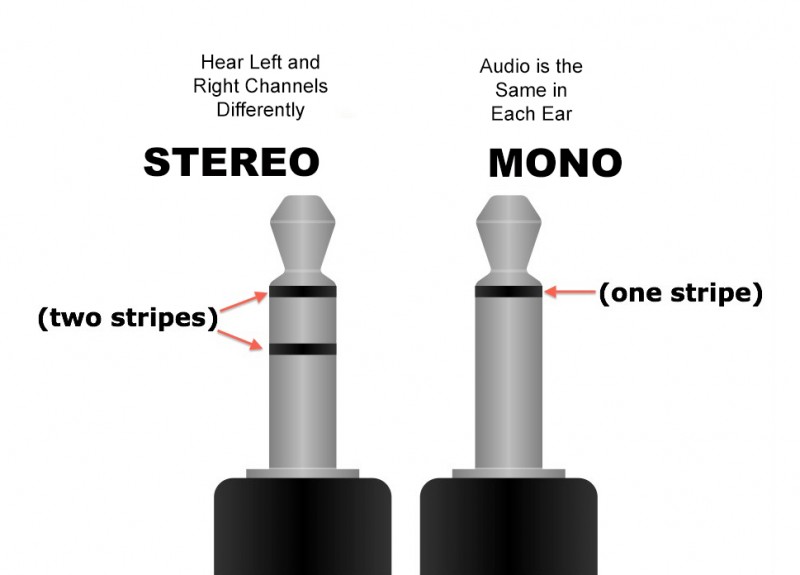 How do you tell the difference between Stereo and Mono types of audio plugs?

Some people think that stereo means two earpieces and mono means one earpiece, but that is not correct. It all depends on the plug wiring. It is conceivable that you could have a mono earphone with two earpieces. Take a look at the plug.

A mono plug will have one black stripe that separates two metal conductors. This is known as TR (tip-ring). The tip is the audio and ring is the return ground for one channel of sound.

A stereo plug will have two black stripes that separate three metal conductors. This is known as TRS (tip-ring-sleeve). The sleeve is usually ground, and the tip and ring are for two channels of stereo audio.

A stereo headset (with built-in microphone) will usually have a 4-conductor plug with three black stripes. The black stripes are insulators that separate the four metal conductors within the plug. This is known as TRRS (tip-ring-ring-sleeve) type of plug. The sleeve is usually ground, and the tip and ring are for two channels of audio, with an extra ring being used for microphone audio and switching.

Be the first to review this product